BASE Jumping inside Saint Pauls’ Cathedral

This was to be a one-off BASE Jump, with everything planned like a military operation. A get-a-way car and driver were parked

near the Cathedral. Strategically placed inside the Cathedral was a large bag containing the specialized medical store, just in case anything went wrong!

An number of helpers (fellow BASE jumpers) were spread throughout the great domed hall, all playing specific parts of a well organized team.

The plan was as follows: Russell Powell (BASE#230) & Dr. Gravity (BASE#229) would join the flow of tourists up to the Whispering Gallery. From the Whispering Gallery they would make their way to the higher Golden Gallery where Russell would make the jump. He would be buddied (to assist the fast deployment of the main canopy by a “buddy” holding on to the pilot canopy at the start of the jump) by Dr. Gravity. The jump would be made using an adapted circular reserve canopy used for hang gliding.

The two made their way to the upper internal dome, but couldn’t find the doorway into the gallery. While continuing their search, they were spotted by one of the priests and had to make a quick tactical withdrawal. We all met back at the Pub for a rethink.

Plan two was to use a ram-air canopy and jump from the Whispering Gallery. After a change of gear, this plan was now in action & Russell & Dr. Gravity went up to the Whispering Gallery. One of the team members distracted the priest “on guard” in the Whispering Gallery, so Dr. Gravity and Russell could duck below the railings to get ready. Dr Gravety did a final safety check on Russell’s BASE gear. He also had the pilot canopy clenched in his hands so he could buddy him. Russell then proceeded to psyche himself up. When he was ready, he stood up, climbed on to the top of railings and jumped eager to complete this ultimate challenge.

The priest in the gallery couldn’t believe his eyes and shouted “Don’t climb.., don’t climb up.., Don’t….jump!!!” 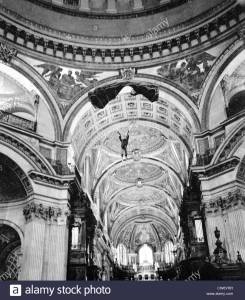 The parachute canopy opened with a loud bang which vibrated around the enclosed dome. The congregation of tourists all looked towards the heavens at the descending figure. The crowd started to move towards Russell, so I moved quickly with the crowd to get the shots I needed. I even managed to get a picture which included some people in the foreground with Russell flying towards us. The canopy had just enough time to inflate before Russell landed on the floor. He landed among some chairs and had luckily escaped without any injuries.

A team member ran over to assist him, pulled the parachute canopy breakaway cord, grabbed him & they ran out of the cathedral together to the awaiting get-away car.

In hot pursuit was a quick reacting nun brandishing a walkie-talkie, shouting “stop!”.

I rewound the film on my two motordriven Nikon cameras, hid these rolls before replacing new film into my cameras. This was 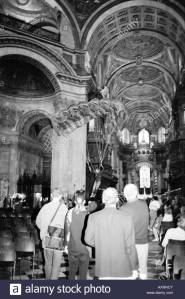 just in case I was caught & the film was confiscated by the police. I put my cameras within my rucksack, picked up the large medical bag, then moved quickly towards the exit. As I left the Cathedral, a police car pulled up outside & the police offices ran towards the entrance. I had escaped!

A few of the BASE team were still inside the Cathedral, Including Mark Scott (World BASE#165, Australian BASE#13, South African BASE#1) & his girlfriend. They were questioned by the police, but as they were just “Australian tourists”, the police let them leave the Cathedral soon afterwards.

Russell had set a new indoor low altitude parachuting world record at 102 foot, nobody was hurt, and the police had the discarded parachute canopy as a vital clue!
The pastor of the cathedral prayed for our forgiveness.
My photographs were published in the national press & syndicated internationally.

A Sample of the Publications: 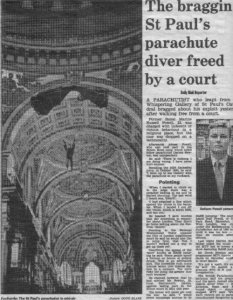