Rupert BASE Jumping the UK Naked

One Sunday lunch time, both dressed in suits and carrying large briefcases we entered 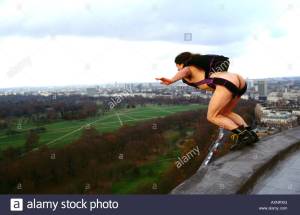 the Hilton and tea in the lounge in order to get a receipt. If we were caught, this could then be produced as evidence of being hotel customers and therefore prevent prosecution for trespass. We then made our way to the lift and got out a few floors below the penthouse suite so as not to attract any attention, walked up the stairwell to

the top floor and checked our way was clear to the roof. Rupert stripped off all his clothing except his Doc Martens (allowable within the rules of naked BASE jumping) and put on his parachute gear. I had two motor driven Nikon cameras taped together, allowing me to shoot both simultaneously.
One well dressed diner choked on his Sunday lunch in the Windows Bar below as Rupert waved and psyched himself up.

Rupert jumped, deployed, and landed safely to a standing ovation from a double-decker bus full of tourists parked nearby.
I rewound the films, hid them, and loaded fresh film in case the police were to stop me and confiscate the cameras. I went down to the hotel lobby, made my way to the exit and disappeared down an alley. I could hear police sirens approaching from all directions. 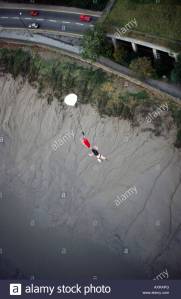 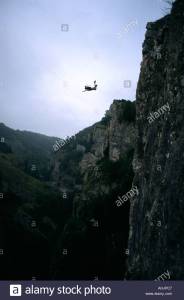 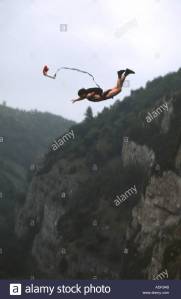